Over the last 24 hours, Bitcoin has decreased by 6% and currently sits at $38,700. Meanwhile, the daily trading volume remains almost unchanged and keeps fluctuating around $30 billion per day.

Over the last 24 hours, Bitcoin has decreased by 6% and currently sits at $38,700. Meanwhile, the daily trading volume remains almost unchanged and keeps fluctuating around $30 billion per day.

Altcoins followed Bitcoin again and moved in a downtrend. However, the ongoing fall of the altcoin market turned out to be less dramatic than that of the first cryptocurrency. This is proved by the level of Bitcoin dominance which decreased to 43% in a day.

Let’s take a closer look at the Bitcoin chart and try to determine the direction it will take in the near future: 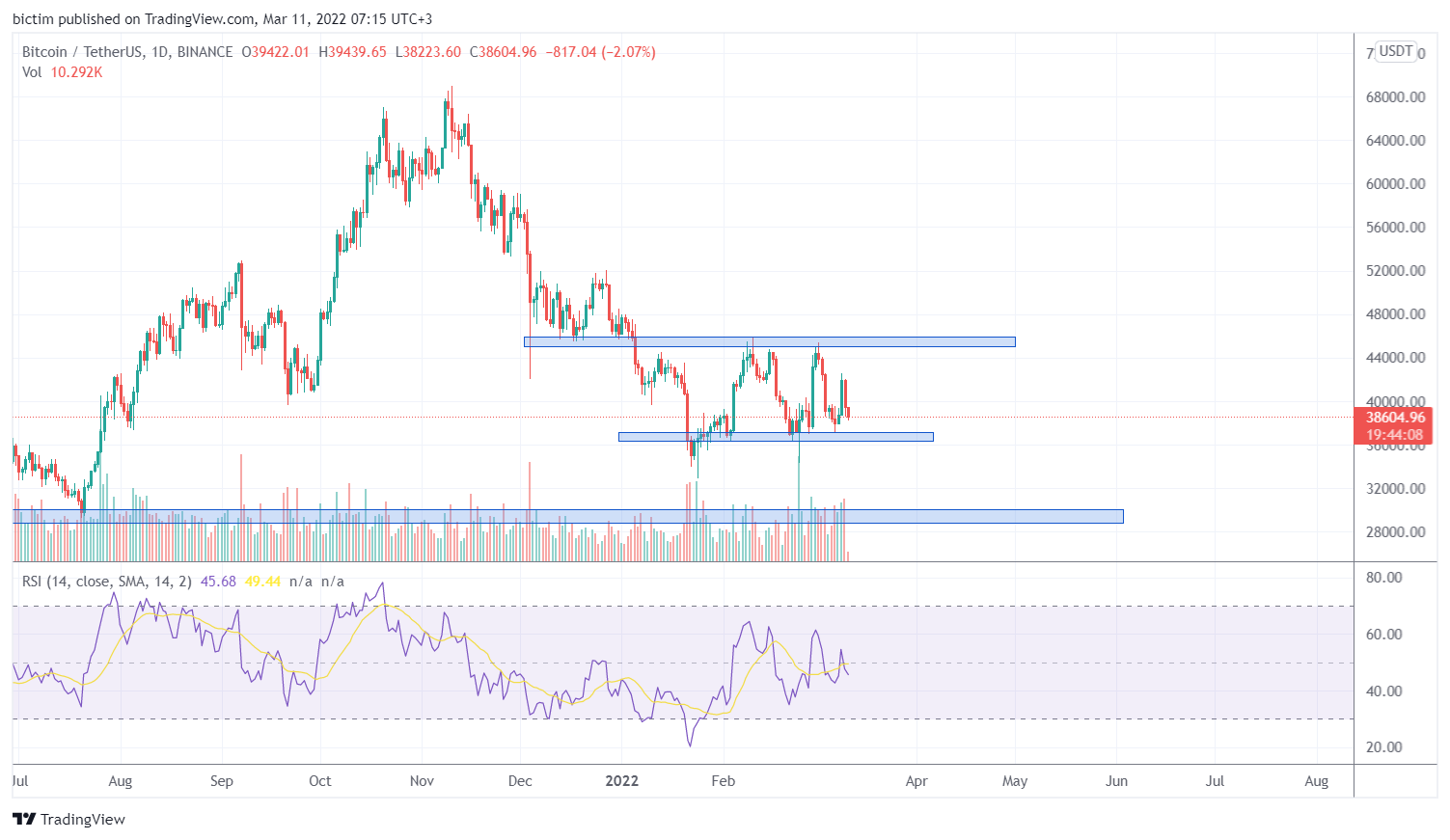 In the middle of the week, the Bitcoin price rose by 10% from $38,700 to $42,600. However, as of the present moment, there have been no noticeable peaks in trading volume which caused some concerns. Eventually, Bitcoin returned to its previous values after three days. As it turned out, this was the second bull trap in the last weeks.

The chart remains almost the same. By now, the price has been moving within a wide sideways channel between $36,000 and $45,000 for already two months. Bulls and bears are taking the initiative alternately, but fail to overcome all key levels. Given that Bitcoin has been falling since November 2021, we are more likely to see a new decline.

Many signs indicate that people left the crypto market and took away their money. That is why the level of interest in Bitcoin and cryptocurrencies has decreased. This usually becomes more obvious during weekends, when the price starts moving in an extremely narrow range and Bitcoin does not add even 1% to its value. This is completely unusual for the crypto market. In addition, the situation like this signals that a lot of funds have turned to cryptocurrencies, given their activity in the middle of the week, and passivity during the weekends.

Based on this factor, it is better to focus on working at a short distance. The $36,000 – $37,000 level represents the main support. Most likely, the price will approach this area today. If buyers fail to maintain it, then Bitcoin has all chances to plunge 20% to $30,000. Due to the high level of fear and uncertainty that reigns over the market, this is the most likely scenario.