Crypto Daily: Bitcoin in Sideways; Tron and Its Ecosystem Grew at Hundreds Of Percents

Bitcoin price continues to fluctuate in a narrow range of $57,000 – $59,000. Volatility has already decreased and the chart finally turned into a sideways movement. This has allowed many altcoins to grow by hundreds of percent over the past week

Tron and the projects built on its blockchain have distinguished themselves especially strongly this week. So, the BitTorrent project moved up to the 10th line by one due to its rapid growth, but the very next day, it dropped back to 22nd place by capitalization.

TRX also showed strong momentum and gained 100% over the week. What is the reason for such a growth of the Tron ecosystem, and should we expect the conquest of new heights from this coin? Let’s figure it out. First, let’s take a look at the chart: 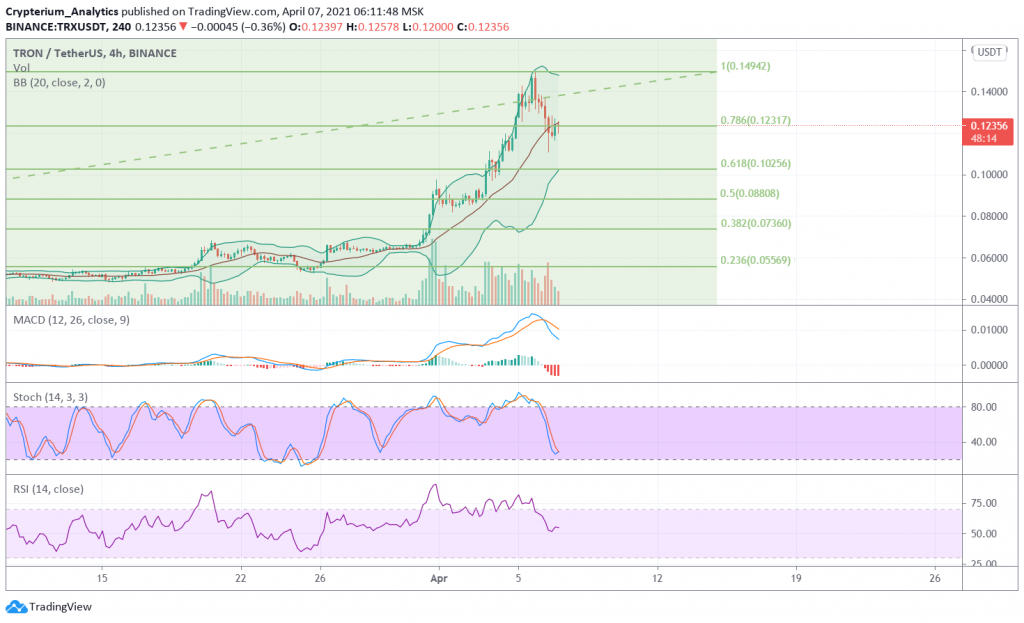 Tron has become one of the main sensations of April. Its ecosystem tokens grow 50% – 100% during a week. All this was preceded by a lot of events. First of all, it is worth noting that since the end of February, Tron has begun to actively develop the ecosystem associated with DeFi projects. Also, the team added funds were allocated to increase staking profitability, which led to an increase in TVL. Then at the end of March, the team implemented the NFT token standard TRC-721.

The project’s CEO, Justin Sun, actively promoted his project and ecosystem. He hired Lindsay Lohan to create an NFT on Tron, bought paintings by Picasso and Warhol to make a digital copy on Tron in NFT, and made billions of dollars in bids at the largest NFT auctions. All together this gave an amazing effect – over the past 2 weeks, the price of TRX has increased by 200%.

Bollinger bands also indicate a decline. Now the chart is near the middle line, but it has every chance of reaching the lower line, just at $0.10. Moreover, sideways volumes indicate a dip in this range, which also often pulls in price.

The rest of the indicators also turned down after impressive gains, and it does not look like they are going to end the decline.

Based on this, we think the TRX will drop further to the $0.10 region. This zone will be the most favorable for entering purchases. We think that the potential of TRX is not yet exhausted, and coins can grow to $0.20 and even up to $0.25. Use our AI Price Predictions tool to know the next movement of TRX with an accuracy of 76%.